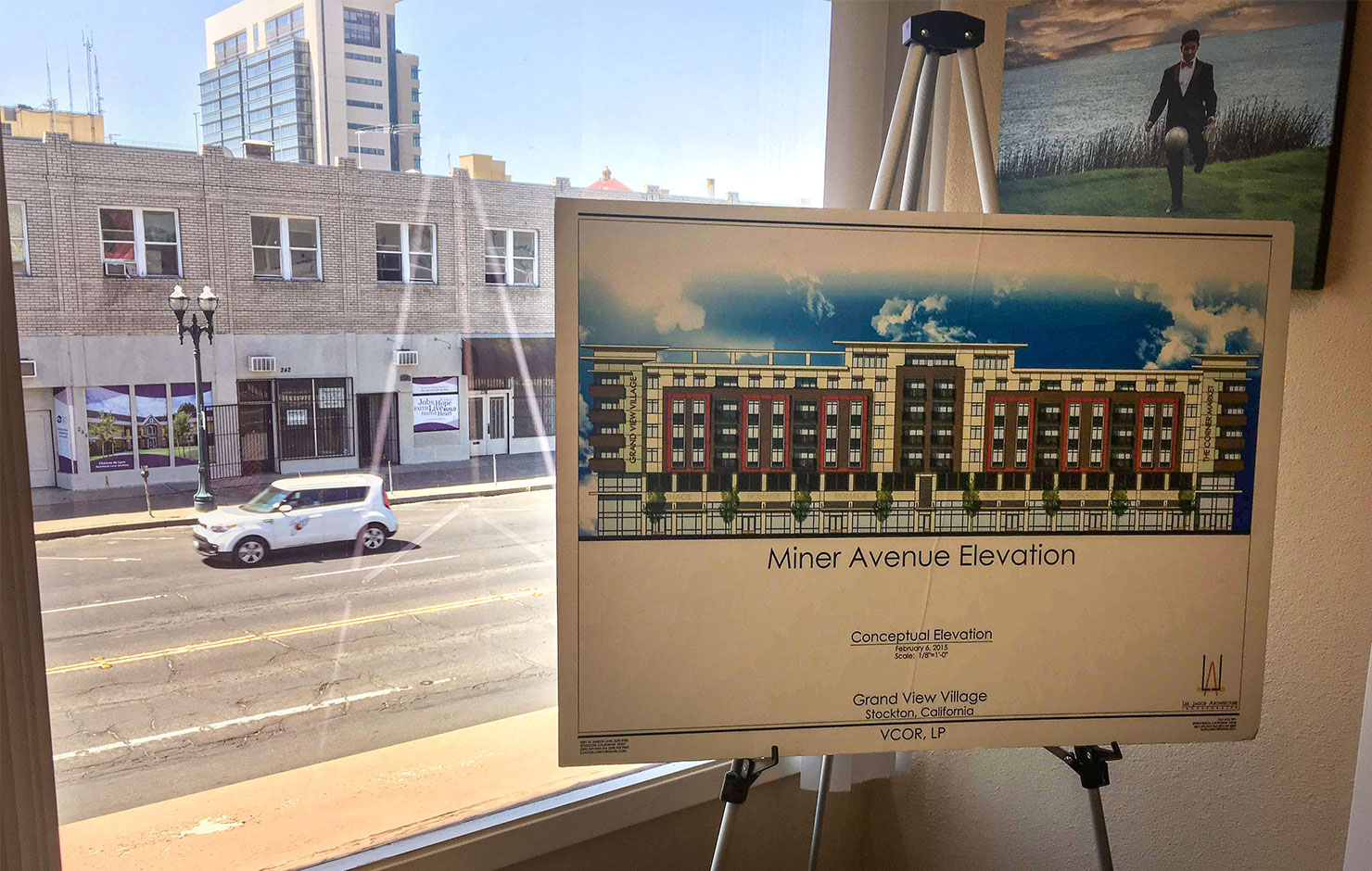 She was waiting for someone at the California Department of Housing and Community Development to update its website and post the latest financial awards in the state’s Affordable Housing and Sustainable Communities (AHSC) Program.

Finally, the update came, allowing Ornelas to let out a deep breath and begin cheering.

Grand View Village, a proposed affordable-housing development first mentioned by Ornelas in late 2014, had been granted $17,894,572. The long wait was over.

“It took five years but we never gave up, and we’ve never given up on our downtown,” Ornelas said late last week. “It’s an exciting day for Stockton.”

Plans for Grand View Village first became public when the Stockton City Council approved the project in December 2015. Plans called for 100 affordable units with the development to be anchored on its ground floor by a supermarket and a café.

Then it was up to Visionary Home Builders to finance the project, which was heavily reliant on AHSC funds that are highly sought after by communities throughout California, including heavy-hitters like San Francisco, Los Angeles, San Diego and San Jose.

The state rejected Grand View Village’s first funding application, its second try and its third. Finally, however, last week’s news brought the waiting to an end.

Projects that receive AHSC funds are nearly as much about environmentally clean transportation modes as they are about affordable housing.

According to the state, $9.9 million of the funds earmarked for Grand View Village are labeled as “Housing Funding,” with $7.7 million labeled “Transportation Capital Funding.”

When it is built, Grand View will not have the 100 units originally proposed. Instead, it will be a 64-unit, four-story structure running along Miner Avenue from Hunter to San Joaquin streets, replacing two aging buildings, including the 100-year-old Delta Hotel.

And residents will be encouraged to use public transportation, receiving free bus passes and only one parking space to a unit, Ornelas said. Grand View will be a short walk from the downtown RTD station and a longer walk or bike ride to the ACE Train station. Ornelas said a key goal is for residents to become used to getting around by foot, by bike, by bus or by train.

“That will be part of our educational component: How do we let go of our cars and start to look at alternatives?” Ornelas said.

Zac Cort, CEO of Ten Space Development, a partner in the project, said, “The construction of Grand View Village is going to be a statement for downtown. We’re finally building new, dense housing and retail in our core, and my hope is that Grand View sets a precedent for vertical, mixed-use projects in downtown.”

City government has a stake in the project, as well. Nearly two years after the City Council adopted a new plan to make Stockton more bicycle friendly, efforts are afoot to achieve that goal.

Among those efforts is a plan that will install protected bicycle lanes along Miner Avenue, starting at El Dorado Street and ending at the train tracks to the east.

As part of this effort, motor traffic on Miner Avenue will be reduced from four lanes in each direction to two lanes, Stockton deputy public works director Eric Alvarez said.

Ornelas expressed strong confidence Grand View, in 2020, will be awarded the tax credits that are the final fiscal piece of the puzzle. She said construction could begin early next year and, if it does, it could be complete in late 2021.

Prospective renters of studio, one-, two- and three-bedroom units will qualify to live at Grand View by earning from 30 to 60 percent of San Joaquin County’s median income, Ornelas said. Demand will be such, based on her experience, that a lottery may be held for the Grand View units and those who don’t get in will be placed on a waiting list.

Ornelas said it’s hardly surprising Grand View had to wait nearly five years for funding because the demand for affordable housing is so great in California.

“The competition has gotten ferocious,” she said. “Stockton is not the only one that needs housing. It’s just a chronic problem right now. The competition is stiff. We had to have patience.”